Like many of you, I delight in the free and open communication that has come through the information revolution and, more recently, the advent of social media. Never before have we been exposed to such an astonishing breadth of varied and competing ideas. Our culture is like a virtual version of the Athens that the Apostle Paul visited in the first century AD where “all the Athenians and the foreigners living there would spend their time in nothing but telling or hearing something new” (Acts. 17:2). I see, however, one immense draw back to all of this: The freedom to say anything we want to nearly anyone we want anonymously has resulted in a disturbing degeneration in our civil discourse. Exhibit A: The Youtube comments section. If you’re anything like me, you enjoy watching the odd Youtube video. And, if you’re anything like me, you may take the time to scroll down into the comments section to read about what people are saying about the video you’re viewing. What you inevitably find are comments (posted anonymously, of course) that are crude and vitriolic. They are profanity ridden tirades published in all caps, devoid of any hint of civility or courtesy. At times, the views expressed by these aggressive posters are sincere. (By that I mean, they actually believe the crap they’re saying). On other occasions, the posters are, in internet parlance, trolls: people who post deliberately provocative thoughts in a deliberately provocative way simply to sow discord and hostility. Needless to say, if one were to spend an entire day doing nothing but reading the comments on youtube pages, one would quickly lose all of one’s faith in the decency of humanity. I am not advocating some form of internet censorship. However, I realize that, for the sake of my own spiritual wellbeing, I need to be intentional about what kind of thoughts I allow to pass from the computer screen and through the borders of my mind. After all, the apostle Paul said, “Whatever is true, whatever is honorable, whatever is just, whatever is pure, whatever is pleasing, whatever is commendable, if there is any excellence and if there is anything worthy of praise, think about these things” (Philippians 3:8). This is precisely what I intend to do this lent: Think of these things. With this in mind, I officially announce my lenten discipline for 2015: to engage in a process of mental fasting from the comments section of Youtube or, for that matter, any rancorous or divisive online discussion forum. (Think of it as the mental equivalent of one of those cleansing diets that some people go on). Moreover, I intend to fill my mind with the writings of one of the canonical saints each day. The amount of reading that I do would depend on the amount of free time that I have on any given day. It could be a chapter from Therese of Lisieux’s The Story of a Soul or a short paragraph from Thomas a Kempis’ The Imitation of Christ. It may sound tedious to some but, in my opinion, infinitely less so than reading the rantings of an internet troll, POSTED IN ALL CAPS.

View all posts by JasmineandTerencechandra

This site uses Akismet to reduce spam. Learn how your comment data is processed.

Pray with us for…. 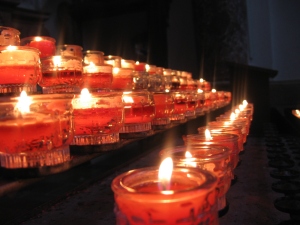 – Our weekly community drop in every Thursday from 4-6pm on the 2nd floor of Trinity Church.

– Our support teams gathered around 3 women who are currently unstable circumstances.

– Our efforts to reach out in the community through various volunteer opportunities.